I thought I was tired the day after Prom in high school when I was basically up for 24 hours straight.  I thought I was exhausted after working 31 our of 37 consecutive hours at the hotel one weekend.  Even in my first trimester, I thought I was just plum tuckered out.  I realize now that was nothing compared to how I’ve been feeling the last few days.

Unfortunately for those around me, that means I’m also crabby, testy, irritable or “sensitive” if you’re being nice.

My amazing husband (he really is) has the bewildered look down pat.  I don’t blame him for looking at me like I’m crazy, because I feel a bit like that sometimes when I’m upset for no particular reason.  He does what he can – rubs my back when I’m trying to get to sleep and preemptively brings me cookies or candy sometimes, assuming that I’m cranky.  And for the record, bringing me baked goods or candy will cheer me up for a bit at least.  My mom knows me well enough to count on this and brought chocolate cake when they came over the other night.

I blame my tiredness on the obvious – I am growing a baby!! – and the related, but less obvious.  I have trouble falling asleep, because I have too much running through my mind – What do we still need to do to get the nursery done?  Will I have a job after BabyMort arrives?  What will we do about our finances if I don’t?  Did I change the dog’s vet appointment?  The list goes on and on…  Once I’m lucky enough to fall asleep, I wake up because of heartburn, achey hips and/or back, because I have to pee, because I’m thirsty or because one of my extremities is asleep.  Usually, once I wake up, I start thinking about all the things that kept me up in the first place and the fun starts all over again.

I have a plan to (hopefully) get at least a few nights good sleep though.  I have yoga tonight and I usually sleep pretty well after that.  Then I made a chiropractor’s appointment for first thing tomorrow morning, hoping that after stretching at yoga, he’ll actually be able to adjust me and relieve some of my back and hip pain (something he hasn’t been able to do since for 20 weeks now…)  And the (chocolate buttercream) icing on the (chocolate) cake – I’m getting a massage on Saturday!!  We’ll put blankets over the windows in the bedroom Saturday night so the rising sun doesn’t interrupt my slumber on Sunday morning and I’d be perfectly happy sleeping until Monday morning if possible 😀

At the beginning of my pregnancy, I wanted so bad to look pregnant.  I knew in the back of my mind that eventually I’d be big and uncomfortable and wishing I wasn’t so obviously pregnant, but I didnt care – I wanted to have a ‘baby bump’ NOW!!   I defintely didn’t think that at 22 weeks I’d be trying to look ‘not pregnant.’  However, when I had a job interview last week, I knew the last thing I wanted was to go in looking obviously pregnant.  Below is a picture of my attempt.  My husband kindly told me that if he hadn’t known I was pregnant, he’d just think I was chubby.  It’s probably one of the only times that would be a good thing to say!!  I can’t say how effective my attempt was, because even though I made it to the final two, they offered the job to the other candidate 😦 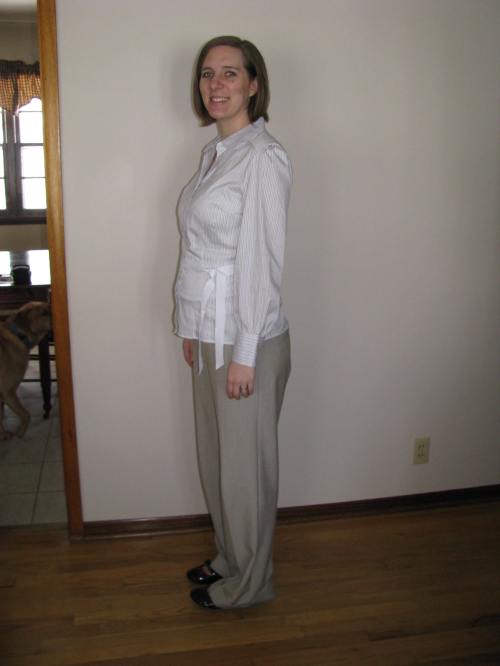 Trying not to look pregnant...

This is my “belly shot” at 23 weeks.  I don’t see much difference in the pictures, but I can tell when I’m getting dressed – you could even see my belly a little when I was wearing a big hooded sweatshirt the other day.

Little Miss Chloe Mae has become quite a mover and a shaker in the last few days – or she’s just gotten big enough that I can feel her a lot more often.  DaddyMort says she had the hiccups the other night.  He woke up at 5AM, rolled over and put his hand on my belly.  He told me the next morning that he could feel her very rhythmically and that he almost woke me up – I told him it was the right decision to just tell me about it the next morning 😀   The good news is that if it wasn’t hiccups, we’ll have a little girl with great rhythm!!

As I’ve heard is quite common, Chloe Mae tends to move around after I eat.  For a while, she was only moving after I ate certain foods, like bacon, ice cream or cookies.  I justified eating those super yummy foods, because Chloe liked it!!  I still made a big effort, and was egged on by my husband, to eat lots of fruits and veggies, but those just didn’t seem to get her going as much.  On Sunday morning Aaron made some Banana Nut Muffins, following a recipe from a book about eating well during pregnancy that I have from the library, and it suggested to serve them with fruit or yogurt.  So he decided to make a fruit salad with yogurt for me.  Well, she went crazy while I was eating breakfast, so I can no longer justify my bad eating choices by saying that it’s what Chloe Mae likes!!

According to BabyCenter, Chloe Mae’s sense of movement and hearing have developed quite a bit recently, so she can feel me dance and hear all sorts of sounds – probably most commonly, the dogs barking and me yelling at them.  She weighs about a pound, and is about 8 inches from crown to rump or 11 inches from head to toe.  I’ve read several “warnings” aimed at me, suggesting that stretch marks will probably appear soon and I’ll start to swell.  So far, I’ve been gaining weight pretty steadily (which I’ve heard is one of the only things you can do to try to avoid stretch marks) and I’ve been trying to stay active and hydrated (which I’ve heard can help prevent swelling.)  I’m still expecting both though…

Aaron (aka DaddyMort :-D) was going to refill his coffee this afternoon and he grabbed my cup to refill my water.  Then, on his way out the door, he asked if I needed anything else.  I responded with, “I’d really like chips, so could you grab a plate for the apple??”  He was out the door for about 3 seconds before he came back in to say, “What?!?”

I explained that while I was craving chips, I knew that I should eat fruit instead.  My theory was that if I ate the apple with peanut butter, then I’d be satisfied and no longer wanting junk food.

Well, I ate the apple with peanut butter, but I wasn’t satisfied and I still wanted chips.  So…I ate chips.  But I had fruit first!!  That’s a step in the right direction, right?!?